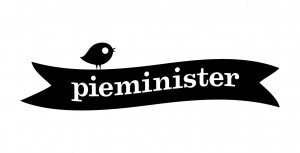 In 2003, inspired by the fresh, original pie shops they discovered in Australia, Jon Simon and Tristan Hogg decided they wanted to revive the once-great British Pie.  So on their return they opened a small pie shop on Stokes Croft in Bristol: Pieminister was born.  Their vision helped revolutionise a flagging British pie industry and soon Pieminister became Britain’s most trusted pie brand. Pieminister has been making pies in Bristol ever since. A local family business (Jon and Tristan are now brothers-in-law), their ingredients are responsibly sourced and Pieminister is the UK’s only national pie company to always use 100% free range British chicken and pork.

In 2016, Pieminister launched three gluten free pies, creating versions of three of its legendary Classics – the Gluten Free Moo, the Gluten Free Heidi and the Gluten Free Ranger.  The pies triumphed in the Great Taste and British Pie Awards with judges remarking that Pieminister’s GF pastry was the best they’d ever tasted.